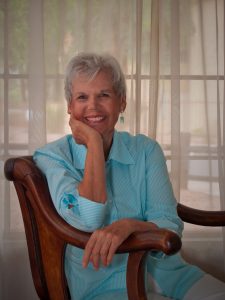 Toward the end of a long career as a computer programmer with several large corporations, and while working for the local newspaper in the IT department, I began writing The President’s Wife, becoming an avid student of American politics and its affects on the lives of American people and the history of our country. Through research into the three branches of our government, I noted the changes that have taken place as each administration has come into office and the effects on the working person up to the corporation. Although a fiscal conservative, I am a proponent of socially progressive politics, not unlike FDR, who had the vision to understand that by giving a hand up to the disadvantaged, everyone benefits. And not long after I wrote and published the sequel, Madam POTUS. In 2008 with the recession, I was laid off from my computing job and wrote She Sleeps with Dogs.

After a bout with cancer in 2010, and overcoming this deadly disease, the world was calling and I began my travels, first to Italy, then Africa, the Bavarian Alps and in March of 2015, Antarctica. I have been writing travel articles and have had some success with being published, but the idea of writing novels based on my travels was very appealing and because I have a love of  animals and feel a pressing need to address the plight of the wild animals on our planet; hence Murder on Safari, the first in a series of mystery novels based on my travels. Since then The Iceberg Murders, takes place at the end of the earth, Antarctica and was published in 2016. Recently I have added Bird House, Adventures in New Zealand in 2018 and Borneo Experience, 2019.

I live with my two dogs, a Brittany spaniel, Lily and a Weimaraner, Sophia in Phoenix, Arizona.

I have also published my memoir, Battle of the Wills under my real name, Elaine Mays and the web site The Diary of a Breast Cancer Patient and have a very inspiring cancer blog; www.alittlerain.com

Be sure to visit YouTube hannah stevens – and you will see some exciting slide shows and videos of my travels.